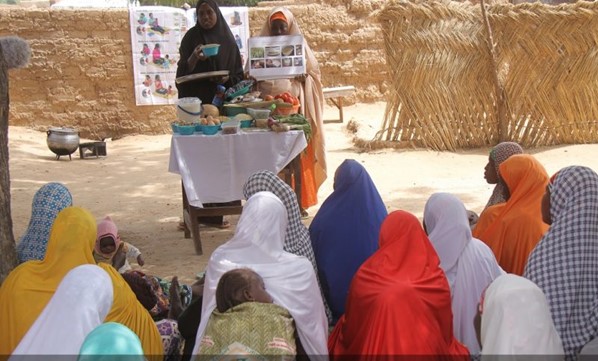 The Working to Improve Nutrition in Northern Nigeria (WINNN) program was extended, and its Theory of Change revised after data showed that the initial program design was failing to address root causes of malnutrition.

Child undernutrition is a major public health and developmental challenge in Nigeria, especially in the north of the country.

The WINN project was originally funded by the UK’s Department for International Development for six years (starting in 2011).

It was implemented in five states: Jigawa, Katsina, Kebbi, Yobe, and Zamfara States. These all had challenging political, economic, social, and physical environments, with a high burden of undernutrition and an under-resourced and under-staffed health system

As the project neared the end of its implementation period, the project team wanted to understand if the interventions had achieved the desired goal: to decrease malnutrition in children.

End-line evaluation, using various quantitative and qualitative data collection methods, was conducted to determine if the key outputs were on track to achieve the final outcome.

The research team used gathered evidence and guidance from diverse stakeholders and beneficiaries, as well as a mixture of quantitative and qualitative measures.

The research showed that the program failed to achieve an overall reduction in stunting rates among the under five children because it has not adequately addressed some underlying and basic causes of malnutrition especially insufficient access to food, inadequate maternal and childcare practices and women access to financial and land resources.

In the end, the evidence gathered throughout the intervention led to a better understanding that you could not fully address issues of malnutrition without addressing social determinants, such as the income status of women. For example, issues such as food insecurity and the inability to access resources may impact women’s ability to engage fully with the services originally offered in the program. The evidence further highlights the need for a multi-sectoral approach to addressing malnutrition, as other growing bodies of evidence continue to suggest.

Through this understanding, consultations with the donors, stakeholders, and program staff led to a revision in the Theory of Change, and the decision by the donor to grant funding for a two-year program extension in two states — providing opportunities for women to gain income, offer training on micro enterprises, and introduce homestead gardens.

How did things improve as a result?

It was not that the goal of the program was changed, but that the scope of what was needed to achieve that goal was broadened and this increased pregnant and lactating mothers’ income and access to nutritious food for the family in addition to the direct nutrition interventions that they receive—thanks to the powerful story told by the evidence.

Where can I find more information?

Now it’s time to learn and adapt. Take time to pause & reflect, study what feedback evidence is saying, and act on your conclusions.