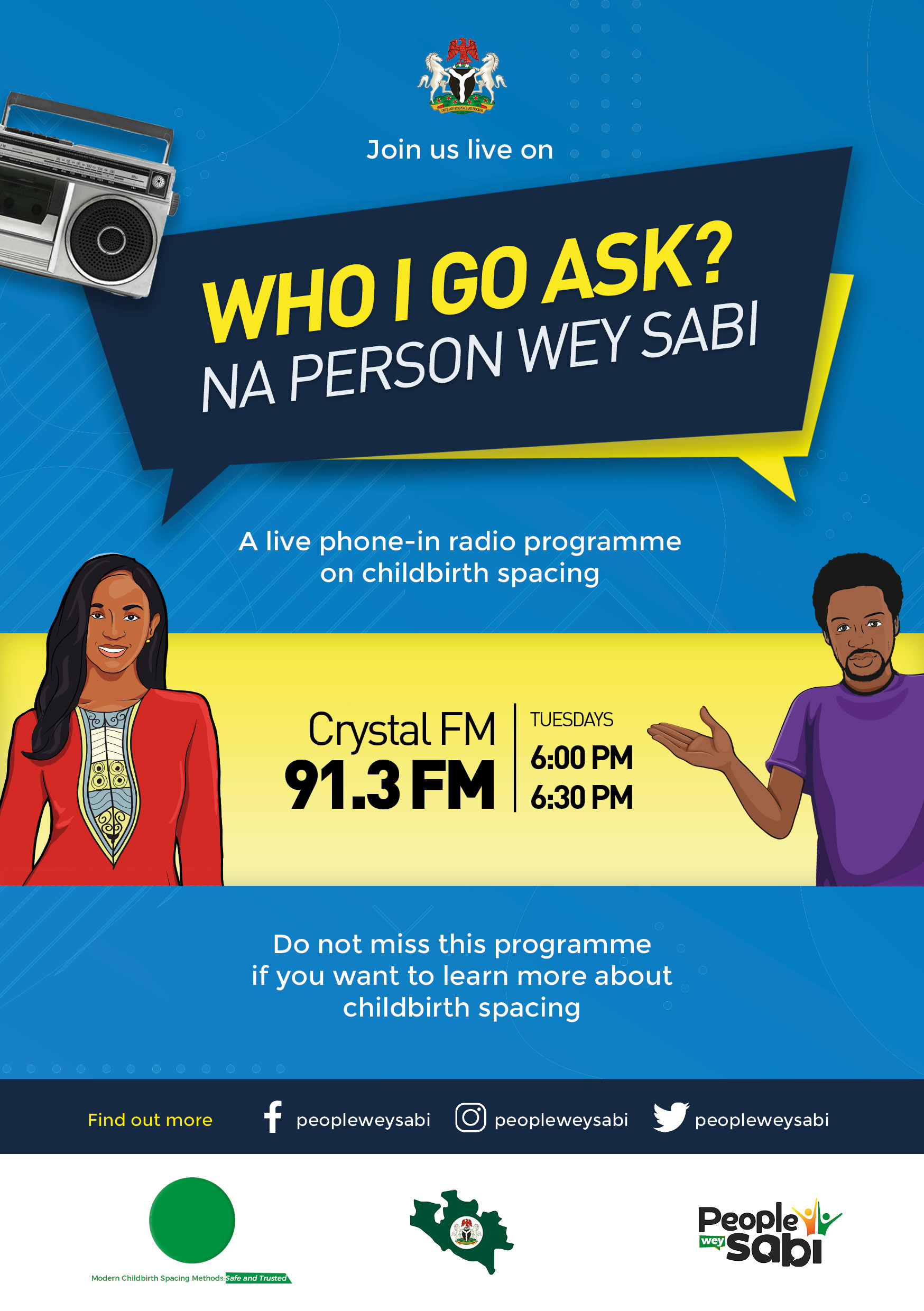 The RASuDiN project used responsive feedback to design and continuously improve the effectiveness of a radio program that was intended to encourage the uptake of family planning methods.

The RASuDiN (The Resilient & Accelerated Scale-up of DMPA-SC) program focuses on encouraging the uptake of DMPA-SC – a self-injected contraceptive, across 10 states in Nigeria. The Centre for Communication and Social Impact (CCSI) leads on the community mobilization workstream, whereby mass media is used to promote the use of family planning methods. As part of its holistic demand strategy, CCSI introduced a live phone-in radio program hosted by family planning experts and trained on-air personalities (OAPs) that aired across nine states. The program, titled “who I go ask? Na person wey sabi”, was aired in local languages such as Igbo, Yoruba, Pidgin and English.

The CCSI team consciously built responsive feedback into their approach from the program design, so that all stakeholders could be engaged in learning and improving. At project inception, CCSI met with the consortium lead, state implementation teams, local government and media monitoring teams to explain the responsive feedback process, its value and establish a culture of open learning so that learnings could be documented and shared as the project progressed.

Initially, the radio program aimed to provide listeners with simple information about the modern FP methods including the self-injectable DMPA-SC contraceptive method. This approach was based on the assumption that women were not using self-injectable contraceptives because they were simply not aware that this method of contraception existed and was available to them.

The first season of the show consisted of 24 weekly episodes that covered a different topic each week. Members of the public were given the opportunity to dial into the show with questions to the hosts, the OAPs and family planning experts.

Following the first season, the CCSI team gathered data to learn and improve the design of the second season of the program. Key informant interviews were held with FP experts and radio program anchors; transcripts of the questions asked by members of the public were analyzed while the performance of each show was tracked by reviewing reports from the media monitors. The quality of responses to audience questions by FP experts was reviewed and scored.

How responsive feedback was used:

Responsive feedback was used in 3 areas: to tailor messaging, to improve hosts’ Q&A responses and to optimize use of radio reach to key audiences

Learnings from Season 1: After examining the nature of the questions being asked by members of the public, the team observed that callers repeatedly asked questions around the potential side-effects of different FP methods. This suggested that the biggest barrier to uptake might not be that the audience was unaware of these methods, but that there were prevalent myths and misconceptions regarding side-effects. It was clear that, in order to drive uptake, the show needed to better address these myths regarding side effects.

How these learnings informed Season 2: Season 2 focused on 6 key topics that were aimed at addressing concerns being mentioned by callers. These topics were discussed during the 24 live episodes specifically designed to address the methods, myths and misconceptions surrounding the use of FP.

Learnings from Season 1: The radio program was hosted by popular on-air personalities alongside FP professionals. However, it soon became apparent that some hosts did not have the capacity to respond to some questions effectively or adequately – either because they lacked the relevant information, or the necessary time to answer audience questions in-depth.

How these learnings informed Season 2: The team reviewed their cast of radio hosts, and – where relevant – replaced key hosts. All hosts who participated in Season 2 participated in regular training/capacity-building sessions that built their capacity to effectively address sensitive and seemingly taboo topics, e.g. encouraging single women and young people to use FP methods in a religious country.

Learnings from Season 1: Season 1 of the radio program was aired across 9 states via 14 carefully selected radio stations to maximize reach amongst the target audience. However, media monitoring reports from Season 1 revealed that not all radio stations gave optimal performance. These observations by the media monitors were addressed in real time and where it was not possible, some of these stations did not have their contracts renewed for Season 2. For example, radio stations observed to be inconsistent with airing times, and those with unfriendly on-air personalities were replaced.

How these learnings informed Season 2: To improve the design of the radio program, new radio stations that would perform better were engaged and adequately oriented. Criteria for selecting radio stations for Season 2 included: radio stations found to air programs in local languages; stations capable of reaching a wider audience; stations with similar programs loved by the audience; and station where management bought into the ethos of continuous learning and improvement.

How did things improve as a result?

Season 2 of the radio program concluded in November 2021. Top-line reports already show that the number of phone calls and text messages received in Season 2 was higher than that of Season 1, suggesting Season 2 more effectively engaged its target audience. Additionally, the demographic breakdown of callers included more males, a key target for the show.

The CCSI team are awaiting the final M&E results, but anecdotal feedback from the radio hosts, media monitoring teams and the shows themselves suggests that Season 2 better addressed key audience barriers and thereby encouraged uptake of DMPA-SC.

TO FIND OUT MORE:

Now that we have identified areas to investigate, let’s write specific learning questions.